Can You Get Sick Eating Raw?

When I started my journey into raw foods over a decade ago, I remember a good friend of mine calling me up and announcing, “Ariel, I want try your diet because I found out about this raw powder I’d like to try!”

I believe this is the wrong approach. When moving to raw foods, you should not be concerned about what you can add to your current diet, but what you must remove!

Sadly, people often experience problems when they first attempt going raw, because they are misinformed. They watch a few YouTube videos here and there and think they are ready to go. Just like this journalist writing for the Huffington Post:

“You know that thing where, like, you know, you need a change in your eating life and you’re watching YouTube and then, like, a week later you decide you’re going to be a raw vegan so you do that?

I did that. Clearly, it did not last.”

Well I am not surprised it did not last for her, because she (sadly, like most people these days) is just – let’s face it, too lazy to read books or do any proper research.

I believe one of the biggest diseases of modern society is the search for instant gratification; people want to be able to achieve their goals and thrive without putting in any effort. Hello? They should not attempt to fool themselves; this approach is never going to work and never could work! Haven’t they heard the expression, “no pain, no gain”?

YouTube can be a useful platform for learning how to open a coconut and such but if you are serious about learning natural health and being successful with a raw diet; social media isn’t the place to look for information.

In my experience while there are a few exceptions, you should not spend more than 5% of your research time watching YouTube videos. You should be concentrating on reading books, researching, or taking specific courses.

Similar things can be said for Facebook, it is a very useful platform for searching for local food markets in your area, for instance, or being able to meet with other like-minded people locally, but it’s definitely not a place to get health advice from strangers. 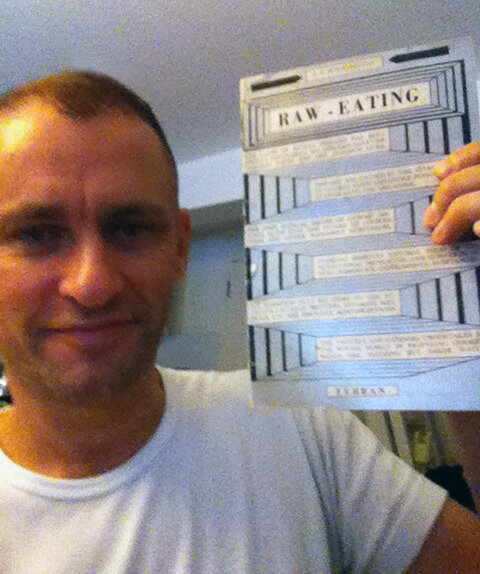 When I first discovered natural health and the power of a raw food diet, being the autodidact that I am, I took 6 years to study the subject thoroughly. I have read over 400 books and my library of natural health titles consists of over 9000 volumes (between physical books and eBooks).

I even joined the British library in London’s Kings Cross, to look for rare items I could not find on Amazon. I regularly visited specialized nutrition bookshops to discover even more literature.

Thanks to the many years I researched natural health, which included acquiring knowledge in other areas of science such as chemistry, I’ve not only managed to overcome some serious health issues myself, but I also helped my mother overcome Leukaemia, which is undoubtedly one my life’s proudest accomplishments.

If you think about it, why would it take me so long to learn about the raw food diet and natural health if it was as easy as watching a few videos of pretty girls babbling on YouTube about being raw vegan?

Going on social media and talking is easy, anybody can do that. Serious research and study requires real time and effort.

Furthermore, I believe that, in order to fully comprehend nutrition and natural health, it’s essential to study politics and economics, so you can understand why certain information is suppressed in our world.

People often criticise my articles, saying that I don’t always “back up my claims with studies”, even though at times, all I am doing is writing plain common sense that even a 5 year old could understand.

The question you should be asking is who is going to pay for scientific studies made about the benefits of a raw food diet? Is it McDonalds? Pepsi Cola? Big Pharma? Local government? Because these are the people who rule the world, right?

Of course, none of these industries and institution would take on such a task (at least for the time being) as these parties have too much to lose by changing people’s eating habits so radically.

In fact, they do the opposite; they pay for biased studies to make people believe their non-sense so they can keep stuffing you with junk food while squeezing money out of you at the expense of your health. Sadly, the poorly educated mass of our communities believes it.

Our society is based on a struggle for power, and very rarely on the search for truths.

Many people have commented that there isn’t enough “evidence” on the benefits of raw foods; when in reality, the opposite is true. Not only has the scientific evidence in favour of this diet has never been stronger, but there are entire sciences dedicated to the study of human physiology and anatomy in order to determine the best diet for human to thrive on.

Sciences such as Natural Hygiene, Naturopathy, and many others have been around for almost 200 years in some cases; Mahatma Gandhi’s favourite doctor was US Naturopath Dr. Herbert Shelton. Incidentally, Shelton (the modern founder of Natural Hygiene) was nominated by the American Vegetarian Party to run as its candidate for President of the United States in 1956. That’s how far ahead of his time Mr Shelton was.

But you see, most people aren’t aware of these disciplines, health practices, and literature because medicine and big pharma have had a monopoly on health since 1908 where previously you could in fact, get professional help in overcoming disease by changing your diet.

And if that wasn’t spooky enough, many holistic doctors are being murdered as we speak in many countries for practicing fasting and other forms of drug free treatments.

All this brainwashing produces an ignorant society incapable of recognizing the facts, going as far as calling anything that promotes health practices no in line with big pharma “pseudoscience”. Unbelievable!

It’s scandalous and sad, but that is the reality of the world we live in.

I trust it’s nearly impossible to get sick eating raw foods, if you know what you are doing, but the majority of people do encounter problems while trying this diet.

Just like eating the wrong cooked food can lead to a plethora of deadly diseases, eating raw foods the wrong way can also give you all kind of complications, which may include.

They may also experience constipation and other digestive issues, because they eat lots of the so called “superfoods” (a term widely adopted by snake oil salesmen pushing for profits at the cost of human health), excessive juicing, and consuming other raw processed foods that shouldn’t be eaten at all, or sparsely, at the very most.

Just because something is raw doesn’t means you should eat it, you need to learn how your body functions as a whole.

Eating a raw food diet ISN’T ONLY ABOUT FOOD. Many other aspects of your health are equally important.

In fact, if you’re unable to get enough sleep, while achieving some kind of emotional balance at the same time, you would most likely fail on this diet.

The good news is natural health is a topic that most people would find fascinating, as you find the answers to many health questions you probably have asked yourself.

Get 16 quick and delicious oil-free meals that will tantalize your taste buds while leaving you satisfied and bursting with energy.