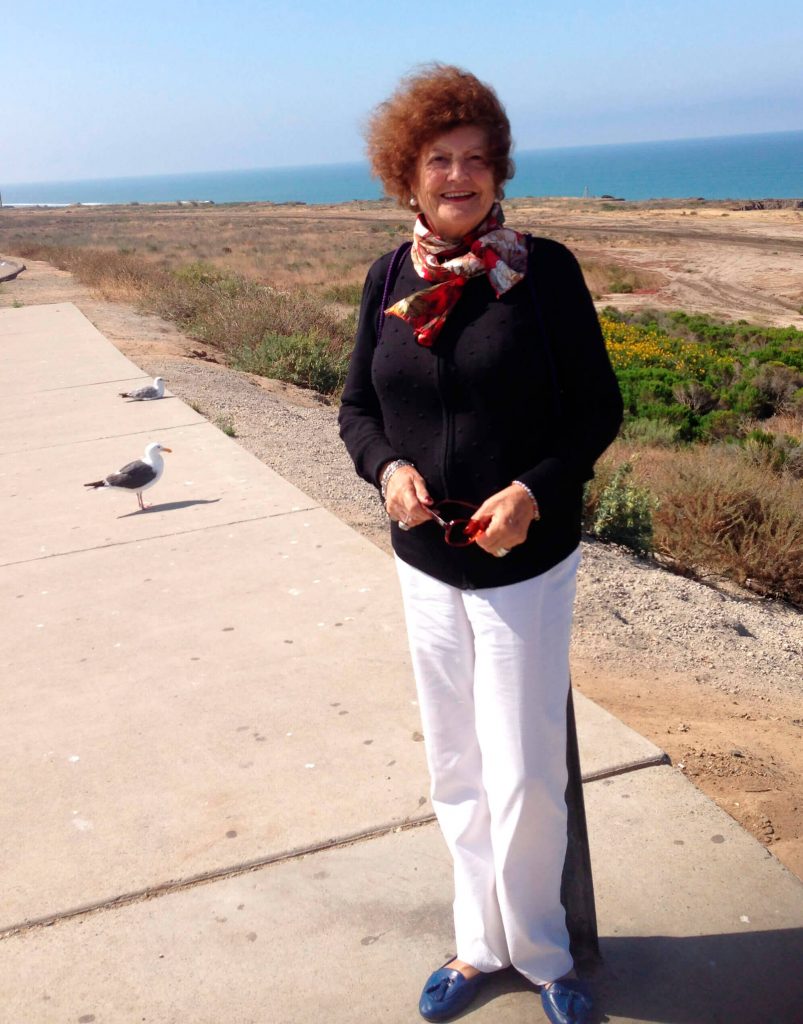 I’ll never forget the day my brother told me my mother had only 2 years to live.

The year was 2002, and my mother had just been diagnosed with Leukaemia after gone through a bone marrow biopsy.

This news came only months after my father passed away; in fact, we believe it was this event that precipitated my mother’s cancer.

I was devastated by the news, as one might imagine. Having had to deal with losing my father not long ago due to diabetes, the thought of losing my mother as well was too awful to bear.

After being diagnosed with Chronic Lymphocytic Leukemia, my mother went through the standard chemotherapy cancer treatment, taking the drugs Fludara and Ciclofosfamida, which consumed much of her life’s savings, as these medicines were very expensive and were not covered by her Argentinian health insurance at the time.

She did not feel well after chemotherapy, and her overall health deteriorated due to her weakened immune system.

She’s also started gaining weight, partly as consequence of feeling lonely and having had to deal with not having my father around. 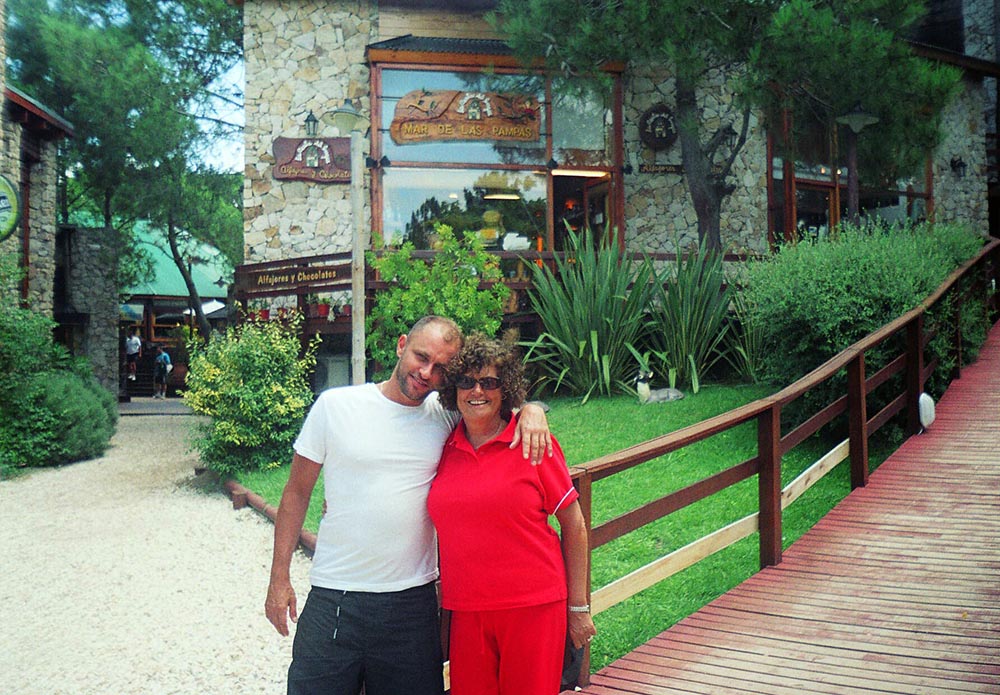 My mother and I holidaying in Mar De Las Pampas (Buenos Aires), both clearly overweight. This pic was taken some years before we started our journey into raw foods.

She often complained how unwell she felt during this period, suffering from bloating regularly and not having enough energy, even though she exercised regularly and did yoga.

Statistically speaking, the chances of a woman of 65 years of age surviving leukaemia and going on to live for five years are 33%. My mother was diagnosed with cancer in 2001, which means that by 2006, her cancer would most likely have recurred.

It was around this time that I was dealing with many health issues of my own, as my hectic DJ lifestyle of travelling the world over for over 15 years started to take its toll on my wellbeing.

I developed Peripheral Neuropathy and Arteriosclerosis, which affected my legs to the point it made standing difficult. Friends and family soon noticed how often I needed to sit down, as I couldn’t stand for long periods of time.

I also suffered from other symptoms and ailments that made my life miserable, such as severe gum disease, widespread joint and back pain (partly caused by lifting heavy record boxes over many years), extreme allergies, and feelings of dizziness, especially when up at a height.

It was at this time too that I have developed acute ear infections that would last for months at a time – constantly interrupting my DJ and music production work.

I experienced poor digestion over long periods, which made me feel so bloated at times; I was embarrassed to go out on the streets.

Don’t think for a minute that my diet was hellacious at the time, I was eating mostly vegetarian and remained health conscious throughout – thought I started to put on weight.

My willpower declined, as happens to most of us as we age.

I smoked a pack of cigarettes a day for many years, which, along with all the alcohol and the rest of “recreational” drugs as I was taking to keep me going… I can certainly testify that my health wasn’t in the best of shape.

A friend of mine suggested to me that I should read a book by English author, Allen Carr, which he thought may help me quit smoking.

It was by reading “The Easiest Way To Stop Smoking” and subsequent books of his that I became aware of, and curious about, the approaches and philosophies employed by Allen Carr.

This interest pointed me to more books on alternative healing, which eventually led me to the discovery of natural health and the low fat, raw food diet.

It soon became obvious to me that this philosophy was going to help my mother overcome cancer and this was the main reason why I decided to take on this approach.

If I was serious about helping my mother with her diet, one thing was certain; I needed to lead by example as I couldn’t tell my mother to eat a raw if I wasn’t prepared to do it myself.

So I dedicated the following 6 years to studying and researching natural health and nutrition.

There are no physical universities for studying Orthopathy (or otherwise known as Natural Hygiene, which is the original science behind the raw food diet), so I learned independently, by reading and studying over 400 books and spending many hours on detailed research and investigation.

I became a regular visitor at the British Library in Kings Cross and many specialised nutrition book shops around the central London area, as well as attending various lectures and workshops.

Even though I lived in London at the time, I was in constant communication with my mother in Argentina through Skype, and I would explain the various topics of my studies to her.

As I began to implement my method of transitioning to raw food foods and began to heal myself, so too did my mother.

After taking my advice of eliminating all animal products from her diet and increasing the amount of fruits and vegetables she consumed – while keeping the overall fat levels at 10-15 % of total calories, my mother started to lose weight in the form of fat and start feeling more revitalized.

70% of my mother’s today’s diet (as a percentage of calories) comes from eating fresh raw fruit and vegetables.

To this day, she still eats some cooked foods in the form of lightly steamed vegetables, rice noodles, soy, and simple, low fat, plant-based recipes, while keeping processed foods and refined foods to a strict minimum.

My mother’s wellbeing improved considerably as a result of implementing other dietary guidelines, which includes food combining and intermittent fasting, among other natural health practices.

After following my dietary advice for a few months, she managed to beat her cancer for good, and the doctor told her in 2012 that she no longer needed further blood tests, as she was now cancer free!

Other aspects of my mother’s health improved as well. She had her gallbladder removed when she was younger, and used to get sick when she ate most cooked food, often resorting to taking Buscopan drops in order to deal with stomach pains.

Her stomach discomfort vanished after changing her diet to raw foods, which goes to show how eating a low fat, plant based diet can improve overall digestion.

Her vision was also enhanced. My mother suffered from myopia during most of her life, which forced her to wear glasses in the past. Her near-sightedness is now considerable better, to the point of not needing to wear glasses any longer.

Since switching to her mostly raw food diet my mother has visited over 30 countries around the world, including China, Russia, the USA, much of Europe, Turkey, Egypt, Dubai, and Hong Kong.

She has also travelled around Argentina, which is something I have not yet done. The rest of the Americas? Brazil, Uruguay, Colombia, Venezuela, Mexico? You name it, she’s been there!

She is enjoying herself immensely with precious health and vitality much envied, admired, and commented on by her friends, and everyone that meets her.

It is important to point out that she still eats mostly raw on her adventures, and hasn’t had the slightest difficulty in doing so.

If you ask my mother why she eats the way she does, she will tell you it’s because she feels great! This is the same answer I give when asked the same question. Yes, the benefits of eating the correct raw food diet are enormous, but ultimately, how amazing you feel on this diet is what makes you carry on.

It’s also important to point out how very little my mother visits doctors these days; at the age of 81, she only takes a thyroid replacement hormone medicine, which is not an unusual treatment for people of her age.

She often refers on how lethargic she used to feel while eating her previous diet and how now she feels much more agile on raw foods, with so much energy to do more and with a greater yearning to live.

My mother’s battle with cancer is not over yet by any means, as I believe we make our health every day with our actions.

I sometimes have debates with her when I remind her of the high fat content of some of the foods she eats and why she should cut it down – which is something she doesn’t like to hear and would complaint to me saying: “I am 81 years old, I want to eat what I like.”

I believe she is no different than any of us with that attitude, as we are constantly being tempted to eat the wrong foods by the people around us, or the situation we’re in.

At the end of the day, we all fight the same battle to stay in good health, though I believe each of us has a much greater chance of preventing and overcoming cancer, as well as many other diseases, by realigning ourselves with nature and living according to its laws. 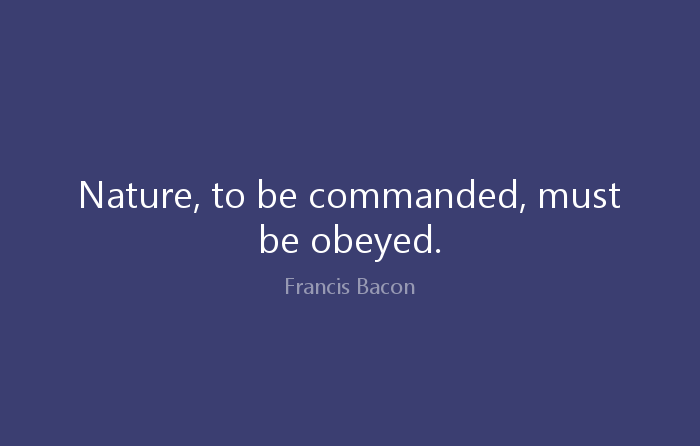 If you know of someone who is suffering from leukaemia and can benefit from learning about my mother’s recovery, feel free to forward this article using the various sharing options on this page.

Looking for easy ways to boost the nutrition power of your meals? Check out the real-world-tested recipes in The Raw Dinner Recipes eBook [UPDATED FOR 2019].