What is the Raw Food Diet?

You don’t have to look hard around social media these days to find comments such as:

“I love eating hot food. Not sure about only eating raw.”

Every time I see statements like these I feel sad, because I believe that many people are missing out on the opportunity of a lifetime to improve their health and vitality through raw food purely through ignorance; they don’t truly understand what it means to eat a healthy raw food diet.

To illustrate my point, I want to share some of my story with you.

I don’t remember how, or exactly when, I first came across the “raw food diet”; but I would guess it was while reading various natural health books during my early years of research, around 2006/7.

The first thing I did when I found the term “raw veganism” was go to Wikipedia. At the time, Wikipedia described raw veganism as “a diet that consists of eating fruits, vegetables, nuts, and seeds; where at least 75% of calories come from raw foods.”

I thought, great! This is the diet I should follow.

If the definition of raw veganism on Wikipedia had said that to eat a raw food diet I had to eat 100% raw from the start, I would have found this diet impractical and intimidating.

We are social beings. Many of us have families, jobs, friends, circumstances, and obligations. An overnight 100% dietary change as profound as a raw food diet would be impractical, if not entirely unfeasible, for most people. Anyone who doesn’t understand this clearly doesn’t live in the real world.

As I studied natural health, I read many books on addiction. I began to implement a raw food diet according to the various advice I received; mainly from educators, such as Dr. Herbert Shelton (modern founder of Natural Hygiene and prolific author), Dr. Keki Sidhwa (author and Hygienist), T.C Fry, Dr. Douglas Graham, and many others, as well as addiction experts, such as Allen Carr.

In later years, I reinterpreted these teachings collectively as my “raw food approach” to wellness.

I began my diet by concentrating on applying certain techniques, such as:

As well as incorporating other important health information that makes the science of Natural Hygiene such a fascinating subject.

As you can see, achieving optimal health by following the right raw food diet goes far beyond foods and percentages.

My results have been extraordinary. After a few weeks of implementing my “raw food approach”, as I call it, I managed to quit smoking for good, something I tried and failed to do through various methods for more than a year. I also managed to quit drinking and other drug use for good.

At the same time as I quit smoking, I managed to lose weight, something most people find quite difficult. In a short period of just 4 weeks, I lost 17 kilos (38 lb) of fat, weight I have not regained.

Thanks to my new found energy, I also re-joined a gym and got super fit.

During this time, I also managed to overcome significant diseases that had been plaguing my health for many years: atherosclerosis, peripheral neuropathy, severe ear infections, severe gum disease, widespread joint and back pain, not to mention dizziness and horrible digestive problems that often left me so bloated; my normally flat belly sometimes seemed almost unrecognizable.

And if that wasn’t enough good news: I have also overcome a chronic depression that I had been carrying around for more than a decade.

More importantly, I achieved all these improvements in my health without taking a single dose of any medication. Extraordinary, isn’t it?

I am not against medicine per se, but if you can greatly improve your health through natural means, without the need of doctors, prescription drugs, or going to the hospital, most people would agree that this is a great outcome.

Of course, Big Pharma and the medical profession (most of whom do not study nutrition and are also unaware of the existence of the science of Natural Hygiene) will look askance at my achievements; this is mainly due to ignorance and also to the fact that my approach does not generate profit for them.

It is also worth mentioning that I made all these improvements in my health while still producing music, and continuing with my previous DJ job playing gigs in London, Ibiza, and around the world; meaning that my social and work life was not interrupted by my change of diet. 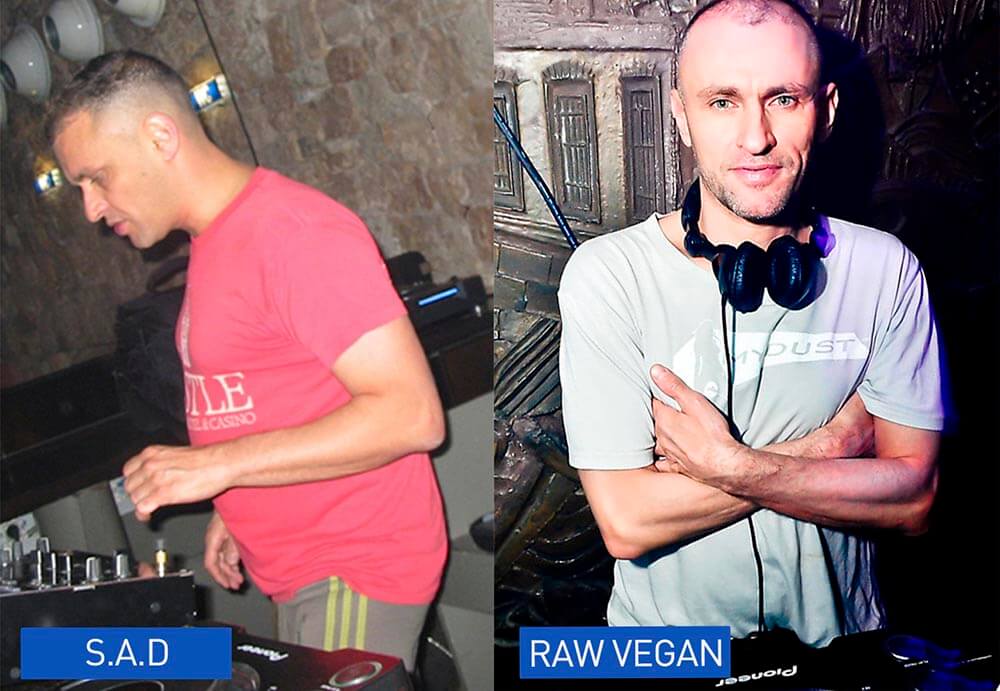 When I started my raw food diet, 75% of my calories came from raw foods, mostly fresh fruit. Of the remaining 25% of my diet, I ate cooked foods.

It is important to note that I did not eat processed vegan foods, be it burgers, cheese, tofu, ice cream, etc. By the way, I did eat a lot of raw vegan ice cream, which can be very healthy and has nothing to do with vegan ice cream.

My cooked food intake during this period was mainly steamed vegetables and other low-fat, low-processed, oil-free, plant based options. I kept my overall fat levels at around 10% (as a percentage of calories).

Yes, there were times when I craved junk food. Occasionally I would eat flapjack, as it is known in the UK (a baked bar made of oats and sugar). It’s OK, because our bodies can tolerate small amounts of junk food, as long as we don’t make a habit of it.

It took me 5 years to get to the point where my diet was 100% raw. It didn’t happen overnight and it wasn’t a big deal. To eat 100% raw, I had to learn new recipes (mainly raw dinner recipes, which gave me the idea to create my book, Raw Dinner Recipes).

I also had to learn new shopping habits (buying in bulk, etc.) and study the raw food diet in detail (i.e. learning about the different types of fruits and vegetables, the ripening process, etc.), which takes time. The habits we build up over a lifetime cannot be undone in a day.

My mother was successfully cured of leukaemia and still does not eat 100% raw; she is not even 100% plant based, but she follows the teachings of Natural Hygiene, which I believe has been invaluable in her success in overcoming cancer.

Unfortunately, in today’s world, many folks’s idea of a raw food diet is to eat 100% raw or nothing at all, a concept that unnecessarily puts many people off, just as it would have done for me.

Furthermore, the dumbing down of our culture means that most people have become so lazy that they expect to learn about any subject by simply watching a few YouTube videos, and following chats and social media posts.

If learning all these things were as easy as watching a few YouTube videos, one wonders why I had to spend over 6 years studying natural health (which is basically Biology) from hundreds of books, while spending many hours and weekends studying at the British Library in London, as well as attending workshops, webinars, and even meeting many of the authors and teachers.

Professor Noam Chomsky once said on the use of the internet: “Internet is extremely valuable if you know what you are looking for. It has a framework of understanding where it directs you to a particular thing and let you side-line lots of others.

This can be a very valuable tool but you always have to be willing to ask if this is the right framework. If you don’t understand what you looking for and you don’t have some kind of conception of what matters, then exploring the internet is picking up random facts that don’t mean anything.”

I think this quote is extremely accurate, especially when talking about health and diet issues. In my opinion, it is only possible to learn natural health and, more importantly, be able to “connect the dots”, when you read and study from the right books and programs. Yes, YouTube and social media can be useful, but you should not spend more than 5% of your research time on these sites.

Following a raw, plant-based diet in accordance with Natural Hygiene (which is a science that has existed for over 200 years and has helped improve the lives of millions of people) is not a race or a competition; it is in essence: the scientific application of the principles of Nature in the preservation and restoration of health.