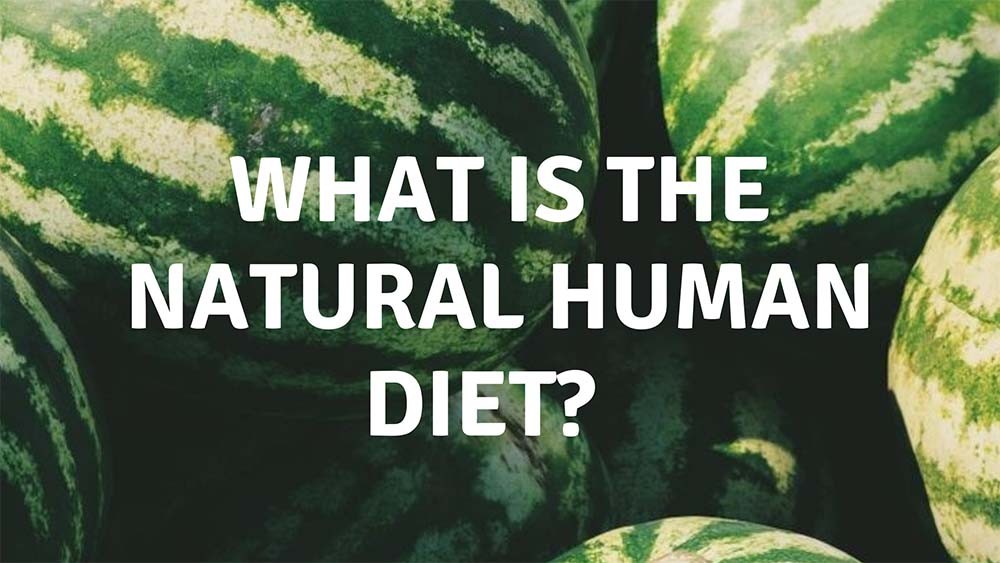 What Is The Natural Human Diet?

Humans are simply a higher form of intelligent creature populating the Earth. Whether you believe in evolution or accept the creation theory, it is quite clear that human life did not begin with eating highly processed, packaged foods.

The invention of the term “balanced diet” is something that humans created in order to market foods. Our bodies do have certain requirements, but if you look at the history of the food pyramid, you’ll quickly see that few really understand what humans should eat. The published and accepted food pyramid changes frequently!

One research study says all humans need X amount of a certain vitamin or mineral, yet the next study will come up with an entirely different result. No wonder nutrition seems so complicated and complex!

Yet, the human population continues to develop diet-related health problems. Have you looked at the animal kingdom? Notice that in the wild animal kingdom, there are few illnesses. Most wild creatures, eating natural raw food diets, die from attack by other creatures rather than food-related illnesses. Others die from old age, having lived a full, long life.

Humans, however, continue to shorten their lives, reduce their energy level and never take time to wonder why.

Here’s a more rational way to look at what nature intended humans to eat?

1. Determine our natural diet. What foods were humans designed to eat?

2. Determine what gets in the way of optimal nutrition. Paying attention to getting enough sleep, regular exercise, and avoidance of unhealthy habits are each part of this process.

Where do humans fit in nature?

There is no chaos in nature. Each animal, including humans, is designed to eat a specific type or class of food. Humans are designed to be frugivores. Everything about humans, from our number of teeth to our sexual organs, suggests we are intended to eat a variety of fruit. Since few creatures, including us, eats only one thing, the inclusion of green leaves and other plant parts is not in violation with the nature of the human.

Let’s look at our teeth and you’ll see evidence of this. We do not have long canine teeth like our cats or dogs. Those long fang-like teeth were designed by nature to rip raw meat from their prey. Even the apes have teeth better designed for eating meat than do humans! Human teeth are designed to grind which is the motion used when eating fruit, leaves, and plant parts.

The acids present in the human stomach are not nearly as strong as those present in creatures intended to eat meat. And, look at our hands; they are clearly designed to hold food like bananas or oranges and be able to peel them – just like the primates do.

When comparing humans to the animal kingdom, it is important to learn that the bonobo, a chimpanzee-like creature is the closest to human beings. They are calmer then chimps and resolve conflicts much like humans. Bonobos eat mainly fruit and a certain plant that is a lot like sugar cane, plus some greens, shoots and buds. They are not known to eat nuts at all. They may, from time to time, partake of a bit of insect, fish or small animal, but they never are seen hunting like the chimpanzees. Less than ONE PERCENT of their diet comes from animal products.

Do you see that humans are designed to eat raw, unprocessed, whole foods? Much of what we eat in the “modern” diet is pushed on us by marketers and is not designed for human consumption!

Humans were meant to be frugivores, eating fruits, some green leaves and other plant products. Everything about our bodies indicates this to be true! We can be healthier if we eat as nature intended. We can live longer, sleep better, have more energy and experience less pain, illness and early death resulting from obesity and other food-related health problems.