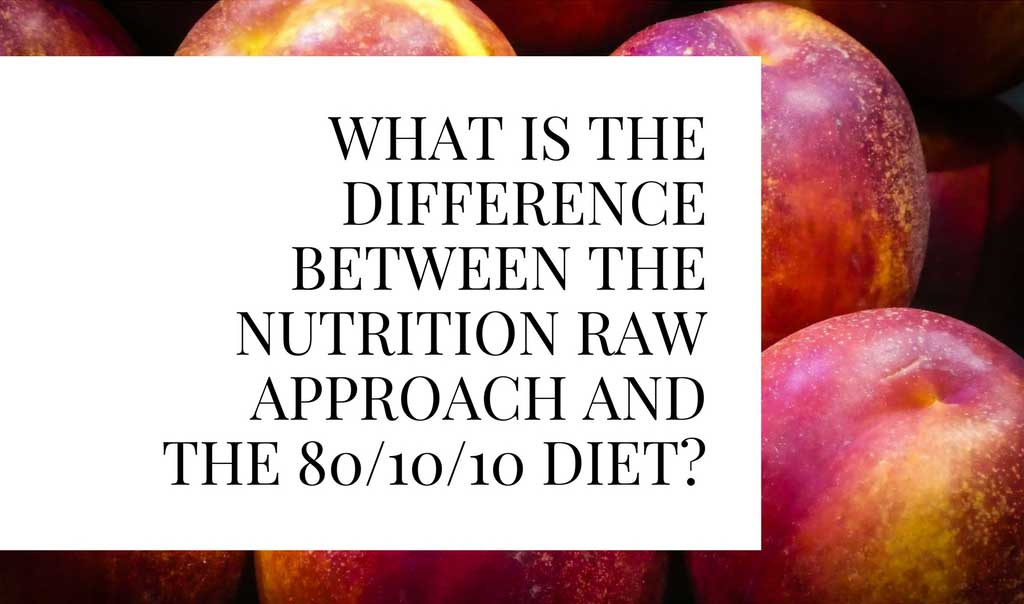 What Is The Difference Between The Nutrition Raw Approach And the 80/10/10 Diet?

I thought it was important to write an article to let some my readers know my specific views on the raw food diet I promote and what I stand for compared to other diet approaches.

I don’t know the exact date the 80/10/10 diet book was released, but I bought my copy around Christmas 2009, and I vividly remember taking this book, along with several others, to read with me on a trip to Buenos Aires, Argentina.

To give some perspective, by 2009 I had already been studying nutrition and health for over 4 years and had read dozens of books on the subject of the raw food diet and natural health. These books included:

– “The Hygienic System Vol 1, 2, and 3”, “Fasting Can Save Your Life”, “The Pristine Way of Life”, “Health for All”, “Superior Nutrition, “Food Combining Made Easy”, as well as Herbert Shelton’s other titles.
– “Life Science” program by T.C. Fry,
– “Diet For A New America” and “Diet For A New World” by John Robbins,
– “The Pleasure Trap” by Douglas Lisle and Alan Goldhamer,
– “The Greatest Health Discovery” from the works of Sylvester Graham, Russell T. Trall and other Hygienists,
– “How Nature Cures” by Emmet Densmore.
– “The Encyclopaedia Of Natural Health” by Max Warmbrand,
– “Fit For Life 1 and 2” by Harvey & Marilyn Diamond,
– “A Practical Guide To Naturopathy” by Stewart Mitchel,
– “Raw Eating” by A.T. Hovannessian,
– “The Nature And Purpose Of Disease” by Anderson And T.C Fry,
– “The Medical Mischief, You say!” by Nell & Guy Rogers,
– “Breaking The Food Seduction” by Neal Barnard,
– “The China Study” by T. Colin Campbell
– All books by Allen Carr

I am an avid book reader and researcher of natural health. The above book list represents only small sample of the books I’ve read up to that point; these are some of my favourites, in case some of you might be interested in searching for similar literature.

So, by the time I got my hands on the 80/10/10 or 811 as it is also known, I already knew much of the science included in the book, as Natural Hygiene’s philosophy and principles perpetuated throughout many generations of authors.

However, there was still plenty of content included in the 80/10/10 book that offered information that I didn’t know up to that point and that has been extremely useful for my health and my studies.

All in all, I have to say that I agree wholeheartedly with the 80/10/10 philosophy, but there are two main differences between the 80/10/10 method and my approach:

The first main difference is:

Even though I agree with the theory presented by the 80/10/10 diet; when it comes to recipes, the idea of including sweet fruit also as part of dinner meals never appealed me, and this, I believe, is an important point of dissimilarity between the Nutrition Raw approach and the 811.

In all honesty, I could not eat mangoes in the morning and in the afternoons while also having mango-tomato salad dressing in the evening. This concept of constantly including fruit never worked for me.

I respect that the 811 sweet dinner recipes work for some people, but when it comes to my diet, what works for me (as well as many of readers) is to eat fully savoury dinner meals, that don’t include fruit for the most part, but are still flavourful and tasty.

We have been consistent since day one on this issue. Every book we have released since we launched our website in 2013 offers “100% savoury” dinner recipes. We may suggest accompanying the dinner with a smoothie as a side drink, which may include sweet fruit in the recipe, but never as the main dish.

Our meal planning – as opposed to 811, includes the option of eating sweet after dinner snacks, in case you fancy eating something sweet after eating your savoury dinner, and we found out this approach works really well.

Our salad dressing recipes also varies noticeably from the 811 approach, as we include slightly more herbs, richer taste, and occasionally use some ingredients that a few other hygienists may object to, like garlic and small amounts of salt and pepper.

My philosophy is simple, the more extreme your approach to diet, the less sustainable it will be over time. Yes, eating some seasoning and spices is not 100% healthy from a combining food philosophy perspective, but we believe it may help over the long term.

It’s difficult to shift from eating the Standard American Diet, or your average vegetarian or vegan diet, with its oversaturated flavours due to consuming large amounts of processed food, to a raw food diet with almost no added flavour other than sweet fruit and a touch of herb, and expect them to stick to this diet for their lifetime.

I believe the more raw foods you eat over time, the better you will accustom yourself to needing less added flavours but this takes time and a higher degree of emotional and mental balance most people living in the current world just don’t have enough of.

I take the approach of giving people the option of eating high flavoured raw foods meals that are low in fat, while still very healthy, while at the same time, allowing them to adjust flavour and seasoning according to their specific needs.

I believe that diet is only one aspect of healthy living and too extreme a diet, by itself, would not help improve other aspects of the lifestyle, such as exercising enough, controlling stress and anxiety, sleeping well, and so on.

The other element that differentiates the Nutrition Raw approach from the 811 is:

Unlike Dr Graham, with his background in exercise physiology and being an all-around athletic person for his entire life, I have been a professional DJ since I was a teenager, and by the year 2000, I became one of the biggest DJs in the Electronic Music scene, with everything the lifestyle implies.

I am not going to go into much detail in this article, but being a successful DJ and a music producer means, for most people, that you are more likely to accumulate a few heavy addictions during your career that you will have to deal with at some point or they will kill you.

In my case, by the time I reached the age of 37, and after travelling the world playing gigs for almost 20 years, my health almost totally collapsed.

I have developed a long list of illnesses and heavy substance addictions that were making my life miserable and incredibly sick.

I suffered from arteriosclerosis and peripheral neuropathy that affected both of my legs to the point it made standing up very difficult.

I had developed serious gum problems, widespread joint and back pain due to carrying heavy vinyl boxes around the world on a weekly basis for many years; I also suffered from ear infections that would last for months at the time.

I also developed chronic depression for no apparent reason and I was gaining weight rapidly.

I couldn’t get out of bed each morning most days if I didn’t take at least 4 Nurofen tablets – a well-known pain killer in England, at 200mg per pill, just to feel “normal”. And some days I would need to take 6 pills.

I used to smoke 20 cigarettes a day – and did so for over 15 years, which was destroying my health and this became my number one priority to sort out; I was determined to quit smoking.

In 2005, a friend of mine suggested to me that I should read a book by London author, Allen Carr, on how to quit smoking. After reading this book, I became so intrigued by the philosophy employed by Allen Carr that I decided to investigate further.

This research into the various areas of addiction – whether is substance addiction or behavioural patterns eventually lead me to the discovery of the science of Natural Hygiene and the raw food diet, as I soon came to figure out that eating the wrong food is I believe our worst addiction.

How many times have you heard people say: I couldn’t eat a raw food diet because I couldn’t quit eating potatoes or bread? Well, that’s clearly an issue of addiction, don’t you think? Have you heard anyone – anywhere – ever say: I have a problem quitting eating bananas or oranges? NOPE – NEVER! That’s because fruits aren’t drugs.

I should point out that my take on addiction is also radically different from the main establishment approach. I deal with personality issues and other matters in what I believe to be a complete unique way.

You could say to me: Ariel, other people has also managed to quit smoking successfully and that’s true, but how many other people out there managed to quit smoking and other substance addiction successfully over time and not put on weight while getting rid of multiple other diseases and illnesses simultaneously, without the need to take any pharmaceutical drugs? Well, not too many, right? That’s what my raw food diet philosophy and approach can do to people’s health.

And I believe it is this vast knowledge and experience I have accumulated over the years that differentiates my website’s information from other natural health resources and books.

I connect the ideas of raw foods, natural health, and addictions in a unique way; I doubt you’ll hear my message framed the same elsewhere.

Some of my readers have also commented positively, after reading my Health For Life program, on my abilities and skills to explain natural laws in simple words.

To finalise, I believe that – whatever our differences, the 80/10/10 diet is a great resource book that everyone should read, but you should also inform yourself on the many other ways and methods that will complement your health and wellbeing, and know how to deal with each specific health issue; your health is the more important asset you have.

The more you read good and trusted material, and by trusted, I don’t mean those titles covered by the national press necessarily, or coming from people with large followings on Twitter blah blah blah; focus instead on the message from lecturers that offer solid science-based solutions and education with a natural health approach that doesn’t sell you a magic pill solution or powder.