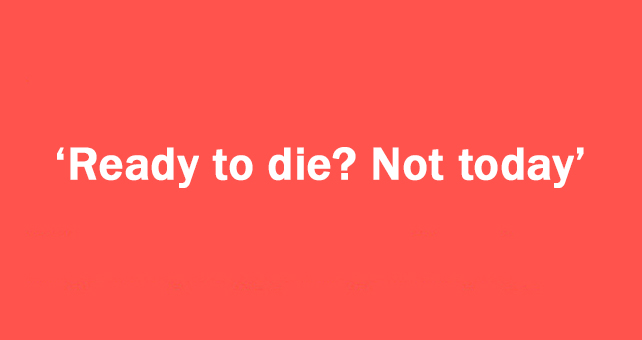 Ready To Die? Not Today.

The attitude of many people these days towards life expectancy and quality of life after they get over the age of 50 or so never ceases to amaze me. They are almost preparing to die or something. Have you noticed the same behaviour?

I think it’s perfectly fine to assume one’s mortality and maybe take a different perspective on life, but making plans for living a life riddled with disease after you hit 50 and suffering from various illnesses until the day you die is definitely not the way to plan ahead.

Disease and illness is sadly the fate of many people, but it shouldn’t be that way. Good health is, in fact, our birthright. We aren’t meant to get sick.

After I learnt natural health and made the transition to the raw food diet, there were times when emotions got the best of me and I ate junk food (cheese burger, French fries, and some other nasty food most people eat).

And let me tell you… These are very good experiences. Do you know why? Because it is then that you realise how much crap the average public eats and why they get sick.

And it is in those times that I think to myself: Gosh, if I was eating this crap on a regular basis, I too would be dying of diabetes and making dreary plans of being dead by the time I am 65. Do you know what I mean?

Luckily, that’s not the life and attitude of someone who learns and follows the natural health path and eats a healthy raw food diet. That’s not how we think; we are here for the long haul.

In the book, “Healthy at 100: The scientifically proven secrets of the world’s healthiest and longest-lived peoples” John Robbins describes the lifestyles and eating patterns of the long-lived cultures, which includes the Abkhasias of Russia, Vilcabambas of Ecuador, Hunzas in Pakistan, and Okinawas in Japan.

He found that these groups of people eat a diet of high carbohydrate, low fat, mostly raw, whole-food plant based diet, which is in direct line with the diet I eat and promote.

And we have plenty of proof and factors as why and how this diet works.

This doesn’t mean that I (Ariel) want to live forever or I will never get sick. Sometimes, we get sick by factors out of our control or because of derangements in our previous diets and lifestyle.

However, the one thing I am not prepared to accept is the negative attitude coming from those eating inferior food and pretending everyone else will have the same fate as them.

The life cycle of most people eating SAD (Standard American Diet) is to get some form of illness at mid age and live a pretty depressing existence until they die at the age of 75 (if they are lucky) from some preventable disease, having previously suffered a life riddled with sickness and pain for many decades. Would you be happy accepting the same fate in your life? I certainly WOULD NOT!

One of my biggest mottos in life is “live and let live.”

Do you want eat crap food, get sick from it, and die? Go ahead.  It’s your life, it’s your choice, and you deal with the consequences.

But don’t think for a minute that I, or anyone else, would have a similarly depressing outcome in life, having already made different choices.

Check out our “Politically-Incorrect RAW Information on Diet & Health” free eBook”: “The Benefits of a Raw Food Diet: 7 Findings That Will Change Your Life”