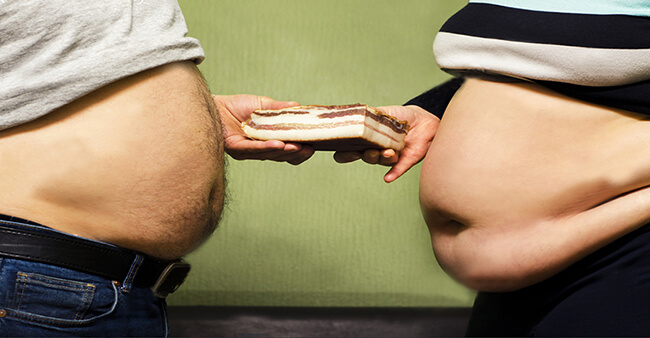 Is Your High Fat Diet Killing You?

When I started my journey into raw foods, I noticed something extraordinary.

Many of my colleagues and teachers, who have been doing my job a lot longer than me, used to rave about the importance of eating a “low fat” diet as opposed to high fat; and I used to think to myself: why do they keep repeating the same message, isn’t it obvious?

Well, after doing my job for many years, I realised why they were so focused on the low fat message; a large number of people still think high fat diets are healthy.

Really, you may ask? Can the majority of the public be so deluded that they believe that “high fat diets” can be somehow beneficial while the human race is experiencing the worst obesity epidemic in history – which is clearly caused by eating excessive amounts fat and not by eating enough fresh fruit (carbohydrates in other words), right?

Some of the truth lies in the fact that most folks are being BRAINWASHED by the food industry and pharma industry at large to believe these lies; it makes money for big businesses to get people fat and sick; it’s as simple as that.

As I write in my program Health For Life: the wider public must understand that there is no real money to be made from selling raw, fresh fruits and vegetables, that’s why you never see commercial adverts for them on TV.

The food industry makes its money through a practice called “adding value” to commodities, such as milk and various other animal products, grains and even water, which in turns produces incredibly unhealthy and mostly processed, “fatty” foods.

To make things even worse, most people don’t read enough literature or inform themselves accordingly other than arguing on social media, so they can be easily fooled.

Or as the late US writer, Gore Vidal once said: “Ignorant people don’t have thoughts; they have emotional responses, which good advertisers know how to provoke.”

And this is what the food industry and pharma business is doing by releasing thousands upon thousands of bogus studies and claims.

Michael Greger gets it right in his article: “the processed food industries use tactics similar to those used by tobacco companies to undermine public health interventions.

They do this by distorting research findings, co-opting policy makers and health professionals, and lobbying politicians and public officials.”

How can anyone explain these foolish newspaper headlines:

•    A high-fat rather than high-carbohydrate diet can help you live longer …
•    Low-fat diet could kill you, major study shows
•    Could a High-Fat Diet Reduce Your Risk of Suicide?
•    Low-fat diet, cholesterol, mood, and suicide
•    High fat diets may make mice live longer
•    Large diet study suggests it’s carbs, not fats, that are bad for your health
•    High Fat Diet Lowers Death Risk and Excess Carbohydrates May Raise It

The world is literally infested by these false health claims on the supposed benefits of high fat foods, to the point that most people started to believe this nonsense.

It’s all a major deception and a con and people needs to wake up.

I even feel “antiquated” endorsing a low fat diet message these days, because the trend seems to be going in the direction of the exotically silly. We must not forget that food is FUEL, not fashion.

Have you noticed that they never talk about good or bad carbs, but they do talk endlessly about “good or bad fats” – like if it was a big deal?

Rest assured that consuming 40 to 60% of total calories from fat (whether they are good or bad fats) will eventually leads to conditions such as diabetes, cardiovascular disease, stroke, cancer, and countless other maladies – there is no escaping this fact.

Leaving aside the deceit tactics employed by the food industry to make sure you keep eating fat, there is another issue at play.

The fat epidemic is not too different from the drug epidemic. People are addicted to fat (which is just as serious as drug addiction) and they will find ANY excuse to hold on to their addiction, which in turn, it makes it easier for those who wish to perpetuate this dependency.

After all, it is more convenient to persuade people to keep eating comfort junk food (mostly stuff you can easily get from supermarkets) instead of trying to direct folks to shop at the greengrocers.

Have you noticed you can mostly buy low-fat, high carb foods while shopping from the greengrocers, unless you only buy only avocados and other fatty fruits and vegs – that is.

By contrast, almost every food you’d acquire from supermarkets and similar shops (except the produce areas of the shop) are full of fat. Someone once said that you should only buy toilet paper from supermarkets, and they are not too far off the mark.

This whole high fat discussion is blatantly obvious for anyone taking some time to read natural health books, but sadly, people tend to be rather uninformed, which is the by-product of a failed educational system and the current decadent capitalism model we all live in, where only 10 individuals own half of the world’s wealth. Don’t expect common sense to prevail anytime soon.

If you can’t see the big picture, then open your mind! You have been conned. Eating a high fat diet, whether it’s called the Banting diet, Bikini diet, Ketogenic Diet, Atkins Diet, High Fat Raw Food Diet… is KILLING YOU!

Fats serve a wide variety of functions in our diet and in the human body. It is wrong to assume all fats are bad; that is NOT what I am advocating.

True health sciences, as well as numerous nutritional studies and research done over many decades, have proven that eating primarily low-fat fruits and vegetables – accompanied by a small amount of nuts, seeds, and fatty fruits – total fat does not exceed 10% to 15% of calories – provides sufficient fat to cover all of our nutritional needs.

Looking for easy ways to boost the nutrition power of your meals? Check out our exclusive “no-oil” meals in the essential guide: Raw Dinner Recipes – Made in 5 minutes or less.