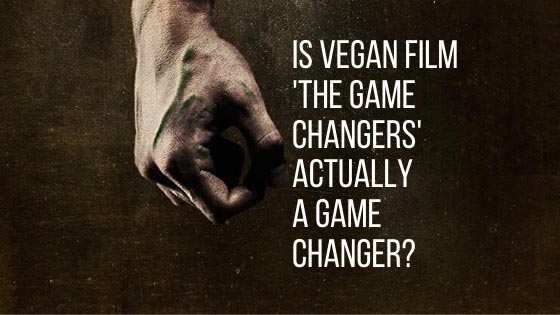 The Game Changers is a much-hyped documentary about the benefits of eating a plant-based diet for athletes.

It’s the latest of a long list of movies focusing on plant based eating, which include: What The Health, Food, Inc., Forks Over Knives, Vegucated, Food Matters, Supersize Me, Hungry for Change, among others.

The film covers multiple success stories of plant-based athletes, references scientific studies, and touches on other arguments for vegan diets that extend to non-athletes.

It has a large list of producers and co-producers, including Titanic‘s James Cameron, and celebrities such as Arnold Schwarzenegger, which also explains its popularity.

I think it is a well put together movie that raises important health issues that (actually) have known for many years. The fact that eating a plant based diet is the most beneficial for humans is hardly a new idea.

Whether or not you trust the research studies on plant based eating and athletic performance presented in this film, I think The Game Changers is having a considerable impact on some sections of society; largely because of the celebrity factor of having film star Arnold Schwarzenegger promoting vegan diets.

I think a lot of people could be better off by watching this movie though; and especially so, those folks brainwashed into believing on the benefits of paleo diets, and well as high fat diets. And there lots of them, believe me…

In many aspects, I found this documentary similar to my Health For Life program, but unlike my book, I believe this film is too mainstream and not deep enough.

If you are an athlete eating the Standard Western Diet in your 20s or early 30s and decided to go plant based, you will gain many health benefits, as is chronicled in the movie.
However, if you are into your mid or late 30s and beyond, I believe you need a more radical approach to achieve great health – such a raw food diet; partly because you have done a lot more damage to your body over the years than a lot of younger people.

At the age of 37, my health almost collapsed. I suffered from peripheral neuropathy, arteriosclerosis, constant ear infections, widespread joint and back pain, depression, poor immunity, severe gum disease, and horrible digestive issues that wouldn’t go away, as well as putting on extra weight – and all of these while eating mostly plant-based.

Being vegan alone wasn’t enough for me to get better and overcome disease; I needed to go raw – the Natural Hygiene way; this is where the amazing results appeared, so much so, I decided to study further and start teaching.

This is not to say that raw vegan diets should only be implemented in order to overcome illnesses. Many well-known athletes have benefited greatly over the years from taking a raw food approach, but I believe this is the next step of evolution.

Don’t wait for the mainstream to catch up on raw foods as it did on veganism, because you might have to wait forever.