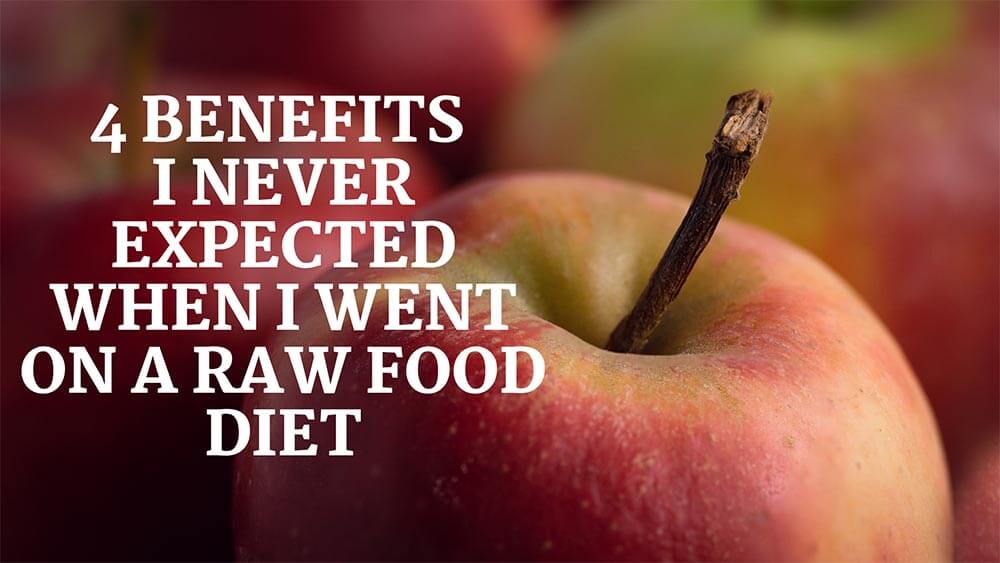 Following a raw food diet (when done correctly) can be a magical time in your life. Changes occur in your body at levels you are sometimes not even aware of.

I studied nutrition quite extensively before attempting this diet and, even so, I wasn’t fully prepared for the scope of changes to come.

Going raw vegan became the catalyst for dramatic positive change in my life, bringing more benefits to me than just weight loss and a leaner body. Here are four benefits that I did not see coming:

– A Holistic Approach to Getting Rid Of Disease.

Eating the correct nutrition is powerful because it addresses the root causes of illness, as well as the symptoms.

Suddenly, I found that I was cured of the health conditions I had suffered from for many years, such as coughs, athlete’s foot infections, cold sores, decreased mucus secretion (which I later discovered had a lot to do with giving up grains, especially wheat), no more annoying sties, no more dark circles under my eyes, no more bad breath, and I even got rid of the nervous tic I had had since childhood that regularly embarrassed me.

This is just a short list of the health benefits I experienced from eating raw foods.

When all these positive health changes start happening very quickly, just a few weeks, while at the same time, you experience huge energy levels, you will think to yourself: wow, this is really something else!

Plus, there are zero negative side effects to the low-fat, plant-based, raw food diet! None, ZERO, NADA!!! This, really, should tell people something about this diet.

Have you read all the nasty side effects people have when they start a Keto diet? Let me tell you, they sound like a horror movie.

– Going to the Toilet Becomes Effortless

I have always said that if the only benefit of eating a raw food diet was how easy it has become to go to the toilet, I’d eat this diet for this reason alone.

The result? The poo is effortless, with no scent at all, apart from the smell of the vegetables you eat. You don’t even need to use toilet paper most of the time, because you are that clean, this is especially true when you eat 100% raw and do food combining properly. I couldn’t believe this at first, it seemed unreal.

This is an extract from Dr. Douglas Graham: “A proper raw diet eliminates constipation, and the transit time of waste matter shortens to 24 hours or less, eliminating the toxemia that occurs as the colon recycles toxins. Most people on the standard American diet experience transit times of 72 hours or more, during which time their food ferments and putrefies inside them. The resulting foul gas and unpleasant-smelling feces highlight the putrefaction caused by anaerobic bacteria breaking down undigested proteins in the colon. These rotting proteins are said to lead to various forms of colon disease, including polyps, colitis, and cancer.”

After being an international DJ for 20 years and living in the fast lane, my emotional wellbeing was all over the place before I switched my diet to raw food.

I remember I started seeing a therapist in London who charged £200 ($230) an hour to try to get some help. This was before I discovered natural health.

The therapist told me that the first session was free, so I did. Luckily, after a few weeks of eating raw foods and studying natural health I no longer needed mental health therapy, because I started detoxing in the most powerful way possible, which also helps your mind.

Now, calculate for yourself: how much money have I saved over the years by not going to counsellors, clinicians, therapists, etc. trying to solve my mental health problems in the conventional way? Probably thousands of dollars, right?

And also, more importantly, the “quality time spent reading and learning from books” instead of trying to solve my addictions by following those horrendous 12-step programs or similar. Thank God I found the science of Natural Hygiene, I say.

– Increased Flexibility And Range Of Motion In The Joints And Spine

I belong to a generation of DJs who played vinyl records for most of my career, remember them? This meant that I had to carry heavy record boxes to my gigs, whether I was playing in cities like London, Madrid, or Ho Chi Minh City in Vietnam; and they were heavy, weighing at least 20 kilos each (44lb). On some special gigs in London, I used to carry up to 4 heavy boxes.

Many years of carrying heavy boxes has caused me various health issues, among them, a horrible lower back pain, which often prevented me from even standing and walking normally. I suffered from this condition for over 10 years. It was horrendous.

Luckily, after a few months of eating a raw food diet, I started to notice my back problem occurring less frequently, until it disappeared completely. Talk about a miracle – it was remarkable!

My case is not unique, as some major studies have confirmed the effect of raw food diets on bone and muscle health. (source)

Interestingly, I started experiencing most of these benefits before transitioning to 100% raw, which is why I always stress that the transition method is key!

Decide for yourself what percentage of raw you want to eat. It’s really not that difficult.